On a Sunday morning Shay Mitchell headed off to work is waiting for a subway when she witnesses a woman jump onto the tracks to her death. Shay is unable to get this  woman Amanda out of her head and ends up at her funeral where she meets Amanda’s friends , The Moore Sisters, Cassandra and Jane.While Shay is interested in befriending the Moore sisters as she is fighting loneliness , the sisters too take a keen interest in Shay’s life, but what do they really want from Shay?

You Are Not Alone is the third psychological domestic suspense by the duo Greer Hendricks and Sarah Pekkanen and having loved the other two I knew I would enjoy this one and was not disappointed. I found this to be  a compulsive read, so hard to put down, full of suspense and tension , a little unbelievable plot but enjoyable nevertheless.

In the fourth book in the Stillhouse Lake series Gwen is working as a PI.  She is investigating a cold case of a young college student’s disappearance three years ago,who seems to be the victim of a religious cult.As Gwen starts unraveling the truth she ends up putting her family and her life in danger as the threat is much closer than she’d anticipated.

Bitter Falls is an action packed fourth book in the Stillhouse Lake series by Rachel Caine. Told from different family member’s POV’s it’s a fast paced thriller  full of suspense and tension. Cannot wait to see where the Proctors land up next!

I would like to thank Thomas Mercer & NetGalley for providing an ARC of this book in exchange for my honest and fair review.

Four women who have been best friends forever decide to go on a vacation with their families together. On the vacation though Kate suspects her husband is having an affair with one of her best friends but finding the truth might be more than she bargained for..

The Vacation is a domestic thriller by T.M. Logan. Unlikable characters, secrets ,lies   and betrayals with some twists made it an interesting read for me though I did feel the ending was a little  rushed. 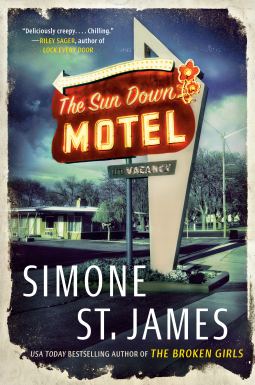 In 1982, Vivian was twenty years old and ran away from home to Fell, New York where she ended up taking the job as the night shift clerk at Sun Down Motel . At the same time, young women in Fell were being murdered. Vivian decided to play investigator and when she came up with a lead, she vanished without a trace.Fast forward to 2017, Viv’s niece Carly goes to Fell, New York, to find out what happened to her mother’s sister thirty-five years earlier. She too lands up working at the Sun Down Motel as the night clerk. Like her aunt, she spends her days investigating the murders of the three women that happened before Viv’s disappearance but ends up putting her life at risk . Will she suffer the same fate Viv did or be able to finally unmask the killer ?

The Sun Down Motel by Simone St. James is a suspenseful eerie read.Told in alternating chapters and POV’s a fun ghostly mystery read that I enjoyed thoroughly and just can’t put it down until I reached the last page.

I would like to thank Berkley Publishing Group & NetGalley for providing an ARC of this book in exchange for my honest and fair review.

FBI agent Reed Markham is trying to solve an old case ,the unsolved murder of his birth mother and seeks the help of Ellery Hathaway. Reed soon learns though that the killer is watching their every move and might be closer than they think

All the Best Lies by Joanna Schaffhausen is the third book in this compelling series. A  powerful, suspenseful read with an exciting plot and well developed characters I quickly devoured this and cannot wait to read the next one 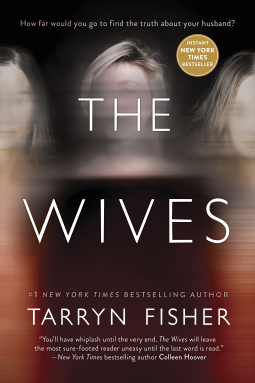 This is a tough book to talk about without giving much away. In short Thursday is married to Seth who has two other wives and she knows nothing about them until she accidentally discovers one of their names .Thursday  can’t help but do a little investigating about the other wives. What she finds is far more than she bargained for and nothing will ever be the same again

The Wives by Tarryn Fisher is my  first book by author Tarryn Fisher, and is definitely not going to be my last.Told from Thursdays POV this is one heck of a dark twisty ride and even though the ending was a little over the top it worked well for this book . Highly recommend

I would like to thank  Harlequin -Graydon House & NetGalley for providing an ARC of this book in exchange for my honest and fair review. 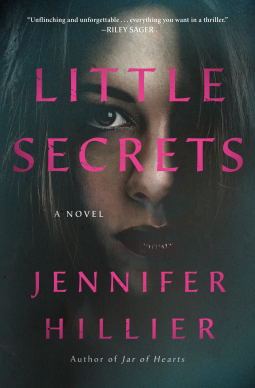 Marin is a successful business woman happily married to her college sweetheart Derek with a son Sebastian. A few days before Christmas Marin drops Sebastian’s hand for just a second at the farmers market to answer her husband’s text but when she looks back up Sebastian is gone with someone in a Santa outfit .16 months later  Marin is still in depression and her marriage is suffering . She hires a private investigator to keep searching and to her shock discovers that Derek is having an affair. Marian has already lost her son but is determined not to give up her husband without a fight.

Little Secrets by Jennifer Hillier is a well written page turning suspenseful psychological thriller . I loved the author’s previous book Jar of secrets and can say the same for Little secrets.  It has great characters and is an excellent psychological thriller with lots of secrets and twists and turns  to discover that keeps misleading the reader. Definitely recommend and am looking forward to reading her next one

I would like to thank St. Martin’s Press , Minotaur Books & NetGalley for providing an ARC of this book in exchange for my honest and fair review. 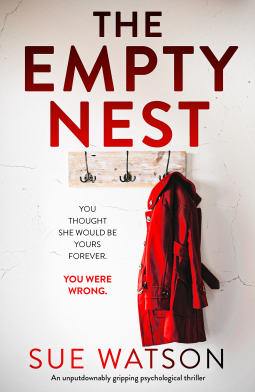 Kat and her 18-year-old daughter, Amy , share a very close relationship . When Amy starts college a few hours away from home Kat misses her terribly but they  are in constant touch with one another. When Amy does not arrive home for the long weekend and Kat’s phone calls or texts go unanswered she just knows something is wrong, but no one takes her seriously. After a few days pass with still no word from Amy, the cops are involved and the search for Amy begins .With a long list of suspects the police have their work cut out for them but Kat won’t stop till she finds out what happened to her daughter.

The Empty Nest by Sue Watson is a dark, addictive, twisted  thriller . It has great characters and is an excellent psychological thriller with lots of secrets and twists and turns  to discover that kept misleading the reader and with an ending that I did not expect made it an excellent compulsive read for me

I would like to thank Bookouture & NetGalley for providing an ARC of this book in exchange for my honest and fair review.

Sadie, her husband Will, and their two boys move to Maine and inherit a  an old ,creepy house from his sister, who committed suicide there. They take custody of his troubled teenage niece Imogen, who is struggling to cope after her mom’s loss. Instead of a fresh start though their lives are turned upside down when, their neighbor, Morgan Blaine, is found brutally murdered and Sadie becomes the main suspect.Soon it becomes clear that someone close to Sadie  may be responsible for murder and with no lack of suspects she does not know who she can trust .

The Other Mrs.is a dark creepy thriller by Mary Kubica .Told through three POV’s it’s a slow burner. The pace does quickens later half of the book and even though it requires  you suspend your sense of disbelief, it makes for an entertaining read

I would like to thank  Harlequin & NetGalley for providing an ARC of this book in exchange for my honest and fair review.

FBI Agent Zoe Spencer is a skeletal reconstruction specialist who uses skeletal remains to recreate the faces of murder victims. William Vaughan is a homicide detective who has some history with Zoe Spencer. A reconstruction of a skull finds Zoe and William working on a cold case from over 10 years ago.As  the investigation progresses though they discover that the case may not be as clear-cut as they thought and the killer might be closer than they think.

I See You by Mary Burton is the second book in the thrilling romantic suspense Criminal Profiler series and can be read as a stand alone. It has well developed characters and is an excellent romantic thriller which focuses on the mystery as well making it an enjoyable addition to the series.

I would like to thank Montlake Romance & NetGalley for providing an ARC of this book in exchange for my honest and fair review.